Genesis 23:2
Sarah died in Kiryat Arba – now Hevron – in the land of Canaan;
And Abraham proceeded/came to mourn for Sarah and to bewail her.

We are quickly moving along with the story of our ancestors, and now, with Yitzhak born, having just survived his father’s attempt to sacrifice him, it is now time for Avraham to say goodbye to Sarah.

The biblical narrative is quite clear: Sarah dies and Avraham does what any good husband would do – he mourns for, and cries over, his wife of many years. The Hebrew verbs used for this are also quite clear, with vayavo – literally “he came,” meaning here “he proceeded” – preceding the two important verbs in infinitive form: lispod – “to mourn,” u’livkot – “and to cry over/bewail.” But, as is often the case, the midrash looks for a seemingly extra word – in this case vayavo – “he came” – as an opportunity to give additional details to our rather sparse narrative.

Bereishit Rabbah 58:5
“Avraham came to mourn…” – from where did he come?
R. Levi said: He had just come from burying Terah.
R. Yossi challenged him by saying: But Terah’s funeral was two years earlier than Sarah’s funeral!
So then, from where did he come?
From Mt. Moriah he came, and Sarah died because [after hearing] of that same sorrowful event.
Hence the juxtaposition of the binding of Yitzhak and Sarah’s death.

The midrash is using a common hermeneutic method, called smichut parshiot – the juxtaposition of textual units. The story of the Binding of Yitzhak come right before this section in Genesis. Sarah, notably absent from that story, is brought into it in Rabbi Yossi’s interpretation, in that her death is attributed to her distress and sorrow over what her husband had tried to do to their child. A much more embellished account is found in a
later midrashic work:

Midrash Tanhuma, Vayeira 23
At that time, Satan went to Sarah dressed up as Yitzhak.
When she sees him, she says, “My son, what has your father done to you!?”
“My father took me,” he replied, “he had me climbing up mountains, down into valleys and finally brought me up to one hilltop where he built an altar, set up what was necessary for a sacrifice, arranged the wood and bound me to the altar, grabbing a knife to slaughter me!
Had God not said to him, ‘Do not raise your hand against the boy,’ I would be dead!”
Even before he finished telling the story, her soul left her.

As sad as this rendition of the story is, it is encouraging to see an ancient source introduce a motherly and female viewpoint, one in which a woman’s voice – not found in the original biblical text – is heard, one that seems to question Avraham’s morals, or sanity! 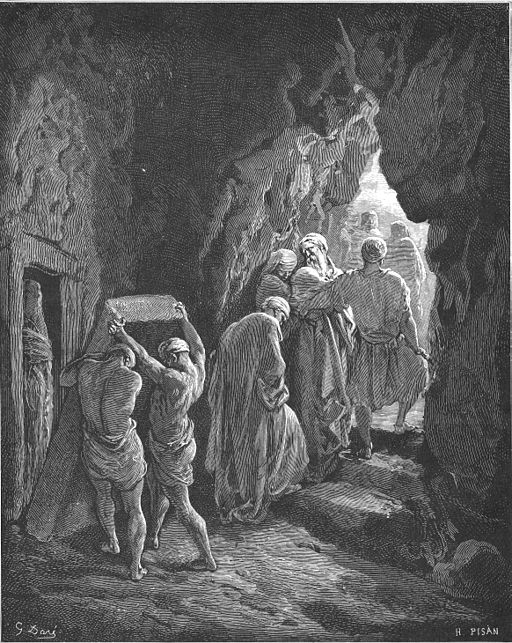 Another vein of rabbinic interpretation deals with Avraham’s tears for his wife attempting to explain how these particular tears were special:

Midrash Tanhuma, Hayey Sarah 3
To whom is Scripture referring to when it says, “A woman of distinction, who will find?” (Prov. 31:10)?
As it says earlier, “And Avraham came to mourn and cry for Sarah” – he began crying and mourning for her asking, “when will I ever find another one like her?”
And so, “a woman of distinction” is referring to Sarah.

Soon we will read of Avraham taking on more wives. The tradition above seems to say that while Avraham always had a woman (or women) at his side, there would never be another quite like Sarah.

Sometimes, the rabbinic eye has focused on a particular feature of the Hebrew word translated “to bewail her”: the letter kaf in livkotah is customarily written in the Torah scroll with a smaller sized font. The simple explanation usually given by modern biblical scholars is that at some point in the copying of the Torah, the kaf was left out and then added by squeezing a smaller letter in between the two other letters of normal size.
However, the rabbinic desire to embellish the biblical text with additional messages and values took advantage of this anomaly, interpreting it as a very limited kind of crying:

Ner Haskhalim (Yemenite Manuscript)
A man who neglects to publicly mourn for a good upstanding person is deserving of an early grave.
And someone who sheds tears for a good upstanding person, God counts those tears and puts them away in a safe place.
But the Torah uses a small “kaf” in the word “livkota” to teach us that a sage should not weep in the presence of unsophisticated Jews (Amei Ha’aretz), and all the more so if the deceased is a woman!

This tradition starts out quite nicely, repeating a theme that is found in earlier rabbinic literature, that God stores the tears shed for a good person in a safe place. But then it turns sour with two separate comments offensive to our contemporary ears: One should not weep in front of people thought to be of lesser status than ours, and certainly not over the death of a woman!

Many of you know how I personally embrace tears, even while engaged in public speaking. That’s just who I am. I often meet with people to discuss some of the most sensitive and emotionally charged aspects of their lives. Not infrequently, when breaking out in tears they’ll say to me, “I told myself I wouldn’t cry when I came to talk to you.” And each time I ask them, “Why!? Crying is good for the body, good for the soul, there is nothing to be embarrassed about.” And more often than not, I begin to cry as well.

But there is also something to be said for limiting one’s tears, at least in some situations and having a sense of perspective. When someone who has had a good and long life, dies after saying goodbye to loved ones and with a sense of wholeness, it is understandable, and maybe even desirable, for one to cry a bit less. And indeed, this is the idea found in Rabbi Ya’akov bar Asher’s, Ba’al Haturim (Germany/Spain 13 th -14 th cent):

“to bewail her” (ulivkotah) – the letter kaf is written small since he only cried a little, since she was an old woman.

Crying might be good for the body and the soul, but not all deaths are tragic in the same way, and sometimes it’s fine, and maybe desirable to cry just a bit less.

Each of us will come to our own conclusions about how best – or not – to cry and how we feel about our tears and the tears of others. We are fortunate that once again, we are given the opportunity to ponder for ourselves, and discuss with others, something so basic in our lives while reflecting upon and reacting to our rich literary tradition.