Hit enter to search or ESC to close
Parshat Hashavua

Last week, we saw some pretty poor behavior on the part of Sarai, Avram and even God. It was, after all, Sarai’s idea to give Avram her maidservant Hagar so that she might bear him a son. Still, when this resulted in a pregnancy, and Hagar began to disrespect her mistress, Sarai became angry with Avram and began to treat her servant badly. Avram, instead of taking responsibility for the situation as head of the household or standing up for the mistreated slave girl before she fled for the wilderness, told his wife that she might do as she saw fit. While God does send an angel to answer Hager’s cries of prayer, God doesn’t do this Godself, seemingly keeping a distance. 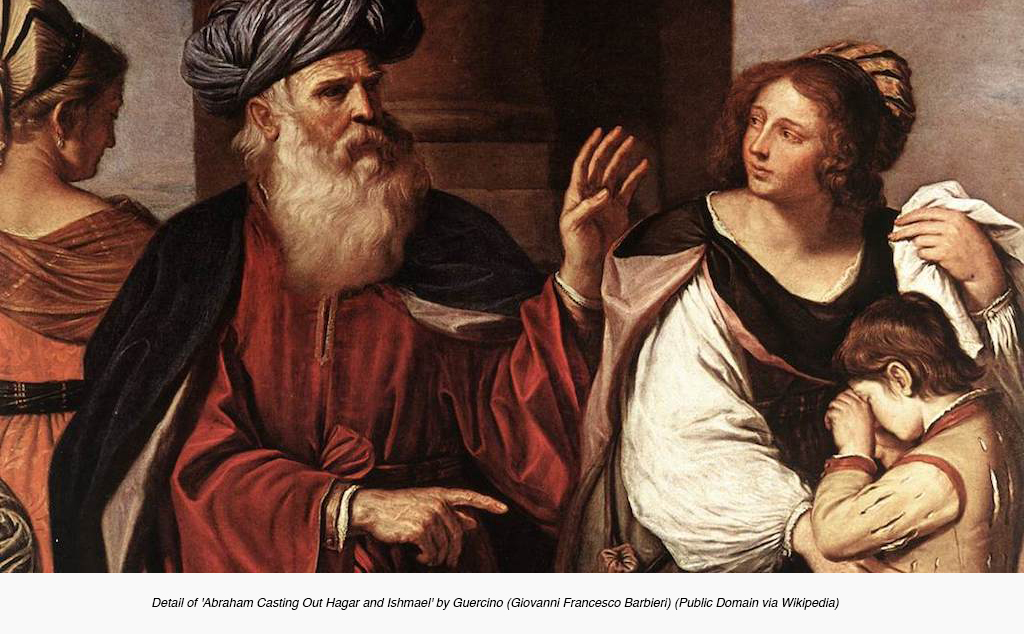 In today’s reading we have a story that brings to mind what we were told a few chapters earlier.
However, this time there are slight changes, albeit important ones. We read how Sarah and Avraham (their names now changed) celebrated the birth of Isaac/Yitzhak. But soon thereafter, Sarah sees Ishmael/Yishamael, Hagar’s son, doing something with, or to, Yitzhak that causes her alarm:

Genesis 21:9
Sarah saw the son whom Hagar the Egyptian had borne to Avraham playing/metzahek.

This word metzahek seems rather innocent. In modern Hebrew one would think of laughter and play, but the context renders it a more sinister meaning, hence Sarah’s reaction. Here is a debate among some of the 1st century rabbinic sages:

Tosefta Sota 6
R. Shimon b. Yohai has taught the following tradition:
R. Akiva has interpreted the word metzahek – the meaning of “tzhok” (the root of metzahek) is none other than idolatry, as it is written “and they rose to dance [as part of in an idolatrous ritual – letzahek]” (Ex. 32:6), from this we learn that Sarah observed Yishmael erecting an altar and would hunt grasshoppers and sacrifice them to false gods;
R. Elazar, son of R. Yosi Haglili says: the meaning of tzhok is none other than sexual misconduct, as it is written “the Hebrew slave came … and tried to seduce (letzahek) me” (Gen. 39:17);
R. Yishmael says: the meaning of tzhok is none other than the spilling of blood, as it is written, “And Avner said to Yoav, ‘let the young men now arise, and play [vayitsahaku] before us …’ and they caught everyone his fellow by the head, and [thrust] his sword in his fellow’s side; so they fell down together” (2 Sam. 2:14,16). From this we learn that Sarah observed Yishmael reaching for his arrows and shot them while aiming to kill Yitzhak;
But R. Shimon b. Yohai says: the context of tzhok is none other than the inheritance, since when Yitzhak was born everyone was saying that a son was born to Avraham, who would receive a double portion of the inheritance and Yishmael would laugh [metzahek] and say, “I am the firstborn and will receive the double portion,” and so it is from the response to this that we learn of the incident, as it says, “and she [Sarah] said to Avraham, ‘cast out that slave woman [Hagar] and her son [Yishmael], for the son of that slave shall not share in the inheritance with my son Yitzhak’” (Gen. 21:10)

Whatever the literal meaning of the word may be, this Talmudic discussion casts a slightly different light upon Sarah’s intentions when dealing harshly with the Hagar and the boy. It seems, at least as opposed to what we read last week, that Sarah has good reason to fear for her son’s wellbeing.

Likewise, Avraham’s behavior is more noble than in the previous episode of tension between the two women in his life. The text tells us that it pained him to send Hagar and Yishmael away: the words “it was bad in the eyes of Avraham” are very reminiscent of last week’s tale, in which God told Avraham to “do as you see fit in your eyes.” What’s more, he sent them away with food and water.

And then there is God. This time no angel, but Godself arrives at the scene to provide comfort for the destitute mother and child.

I am in no way saying that this story is an ideal one. It pains us to see this kind of narrative told of our ancestors, and we must be conscious of the message it sends, especially to our young people. On the other hand, when compared with what we read last week, our characters come out looking a bit better. This is a prime example of what Prof. Yair Zackovitch (who first enlightened me with this reading of Genesis) calls Inner Biblical Midrash, a way in which the Bible corrects itself in the message that lies therein.

For us, I think it shows that people are given a second chance, and when that happens, they can always improve.