That same night he arose, and taking his two wives, his two maidservants, and his eleven children, he crossed the ford of the Yabbok.
After taking them across the stream, he sent across all his possessions.Yaakob (Jacob) was left alone.

The biblical text is decidedly mysterious about the identity of the man with whom Ya’akov wrestled.

An angel of the Lord? Perhaps. After all, Yaakob does go on to ask him for a blessing before he leaves at dawn.

According to Rabbi Hammah bar Haninah, the man was indeed an angel, but he was the heavenly representative of Yaakob’s estranged brother Esau, who challenged him before the brotherly encounter that would come the following day. (Midrash Bereshit Rabbah 77:3). However another midrashic tradition (Avkir, ed. Wertheimer) holds that this man was none other than Michael, the angel who is responsible for helping Yaakob. And yet another interpretation, this one from the Church Father Clementine (Instructor 1:7), says that it was actually Jesus with whom our father Yaakob was wrestling.

The common denominator among all three of these views is that, in essence, Yaakob is kicking up the dust with the next best thing to God, that is, God’s presence on this earth—either an angel in the classical Jewish angelic-monotheistic way, or as part of the Trinity, in the Christian way.

The episode ends with Yaakob receiving a blessing, a gift from God—his new name, Yisrael, the one who has struggled with God (or with God’s messengers). 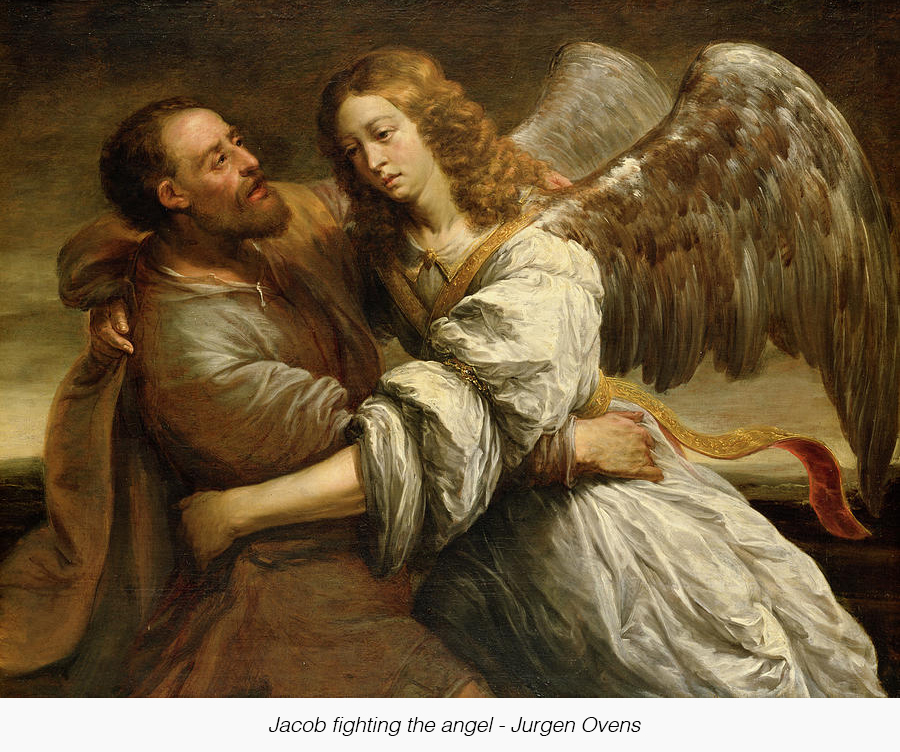 So Yaakob struggles with a force that somehow, left alone at night on the banks of the river, represented his own fears. And in fact, life has always been a struggle for Yaakob—first in his mother’s womb, then from birth, growing up in a kind of competition with Esau, twice
outsmarting him, but in the end fleeing from his homeland, only to struggle with his father-in-law, Laban. And now this mysterious opponent. But this seems to be a different kind of fight, one in which Yaakob is all alone, without his mother Rivkah to support him, without his wives and children, whom he must support. Just him.

One might imagine that Yaakob has had enough and that now, with his entire family on the other side, on their way back to his people and at the same time, fearing for his life, perhaps he might want to escape, to run away and simply stop the struggling. This is, according to
Rashbam, Rashi’s grandson (France, 11-12th cent) the reason the angel confronted him to begin with: so that he would not run away.

Yaakob/Yisrael has always been the template for the Jewish narrative. In every generation Jews, both leaders and followers, have been involved in a struggle. Sometimes it has been for physical survival, in other times, for freedom to practice and believe in our own unique way. To be sure, much of that struggle is against other nations, other cultures, and sometimes just misanthropic
individuals. That is who we are, who we were and most possibly who we will be. But there is, I believe, a greater lesson to be learned from the passage above and the history of interpretation. We are expected to struggle with ourselves as well. My friend and colleague
Rabbi Bradley Shavit-Artson—truly one of the great teachers of our time—writes of this lesson under the heading “Wrestling with Ourselves” (The Bedside Torah, p.55-56):

Jacob becomes a deeper, more mature person … no longer the wily, shrewd, and obnoxious child he once was. Instead, through the process of introspection, remorse, and a commitment to confront his own failings, Jacob is able to make himself into a
better, more empathetic individual.

Jacob is able to find the inner strength to apologize to his brother and to change the way he relates to other people. All it takes is effort, time, insight, and commitment.

The Babylonian Talmud (Hullin 91a) uses our little story here as a proof text when it states that a sage shall not journey by night on his own so that he not be attacked by such a demon. I respectfully disagree. Just think, if Yaakov had not gone out on his own at night, left by himself, alone by the banks of the river, we would never have heard the story of this confrontation, the quintessential characteristic of what it is to be a Jew.