We have now reached the stage in the Exodus narrative of the Israelites actually leaving Egypt. In this Black History Month, I suggest we all give particular thought to this part of our ancestors’ story.

In Exodus, we read of the ten plagues with which God, helped by Moses and Aaron, was able to convince Pharaoh that it was in his own best interest to free this nation of slaves. Last Shabbat, we read (Ex. 12) how the people were instructed to prepare themselves, both spiritually through the rite of the Paschal lamb, and materially by gathering their cattle and flocks, by baking unleavened bread, and even by “borrowing” silver, gold, and clothing from their captors (11:2-3, 12:35-36). No matter when we read these Torah portions—at this time of year or around the table at the Passover Seder—our imaginations are gripped by the haste with which our ancestors prepared to escape. Would Pharaoh reconsider and change his mind? Would God again harden his heart? Would they ever strike out for the Promised Land?

Yet  the Torah is careful to point out that, despite their haste, Moses was careful to fulfill an oath made hundreds of years beforehand:

And Moses took with him the bones of Joseph, who had exacted an oath from the children of Israel, saying, “God will be sure to take notice of you: then you shall carry up my bones from here with you.” (Ex. 13:19)

The narrator quotes from the end of Genesis: though Joseph had the stature and political power to return his father Jacob’s remains to the Promised Land, he realized that immediately after his own death, his body would remain in Egypt. So Joseph had the children of Israel swear to him that when the time came, they would reinter him in their ancestral home.

So now, notwithstanding the rush, Moses had the presence of mind to collect Joseph’s remains. The Midrash (Michilta D’Rabbi Y’shma’el) elaborates:

This apprises us of the wisdom and saintliness of Moses. All of Israel were occupying themselves with the spoils [of Egypt], and Moses was occupying himself with the mitzvah of the bones of Joseph. Of him it is written, “The wise of heart will take [upon themselves the mandate of] mitzvot.” (Proverbs 10:8)

The spoils mentioned are the valuables the Israelites asked their neighbors to “lend” them before departing Egypt. Of course, they had no intention of returning these objects. Along with explaining how they built the Tabernacle in the middle of the desert, we understand this appropriation as payment for their centuries of servitude.

Both of these “takings”—the spoils by the Israelites, and Joseph’s bones by Moses—seem particularly significant to me after my visit last week to Montgomery, Alabama. Together with a group of rabbis and lay leaders, I participated in a program organized by Truah: The Rabbinic Call for Human Rights. We met with representatives from the Equal Justice Initiative (EJI), founded in 1989 by Bryan Stevenson, author of the book and film Just Mercy, and we spoke among ourselves about the best ways to call attention to and to oppose racial inequality in our communities. 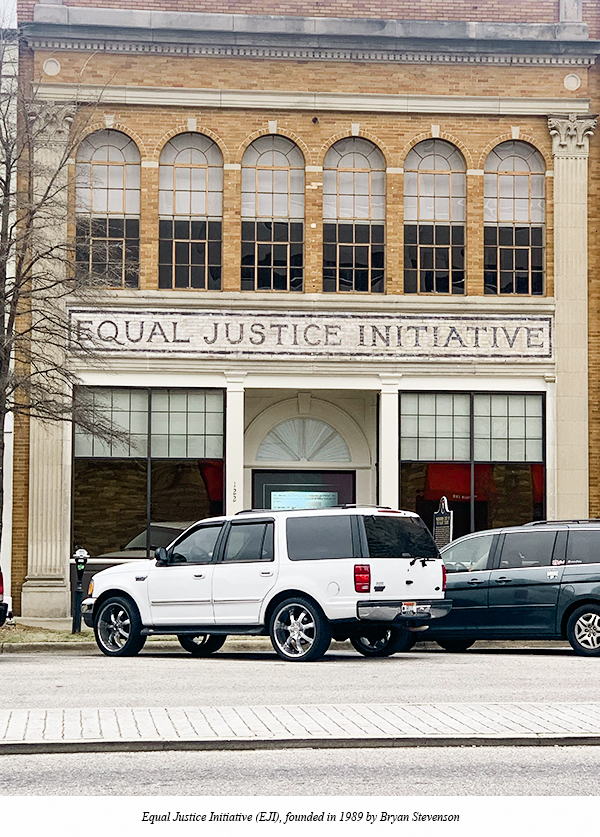 The centerpiece of the program was our visit to two of EJI’s important contributions: The Legacy Museum: From Enslavement to Mass Incarceration, and The National Memorial for Peace and Justice. So much to tell and still more than I have been able to process, but the midrashic tradition I point out above brings to mind the following two features in connection to my experience in Montgomery and in general, in this month of February, devoted as it is to Black History. 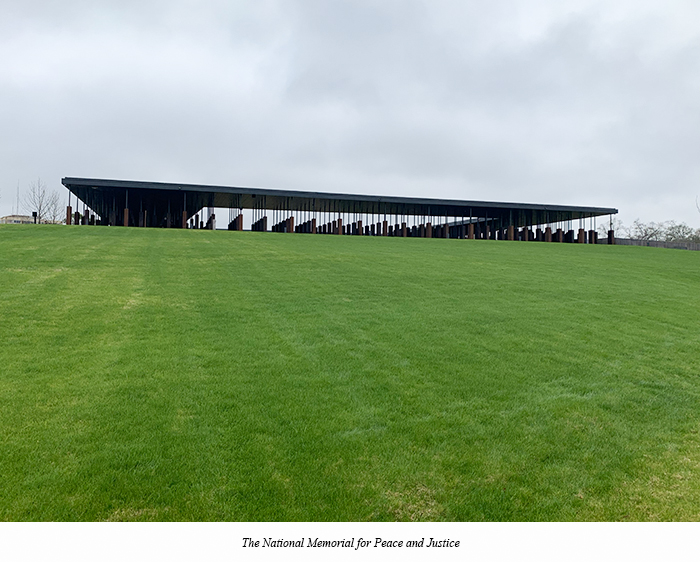 The first is the Community Remembrance Project, designed to raise awareness of, and to commemorate, the thousands of victims of racist lynching, not only in our Southern states but also throughout our country. From EJI’s website:

EJI’s Community Remembrance Project is part of our campaign to recognize the victims of lynching by collecting soil from lynching sites and creating a memorial that acknowledges the horrors of racial injustice.

Between the Civil War and World War II, thousands of African Americans were lynched in the United States. Lynchings were violent and public acts of torture that traumatized black people throughout the country and were largely tolerated by state and federal officials . . . .

Public acknowledgment of mass violence is essential not only for victims and survivors, but also for perpetrators and bystanders who suffer from trauma and damage related to their participation in systematic violence and dehumanization. Yet most lynchings, and their victims, have never been publicly recognized.

Both in the museum and at the memorial, shelves and shelves of glass jars display earth collected from lynching sites by volunteers across the nation. One gazes at these jars and imagines that in the troubled soil they contain are the bones and the blood of victims of injustice. Brought from the sites of their atrocities to one central location, these remains reproach the viewer in one silent voice. And they can lead to action in much the same way that bringing Joseph’s bones to the Promised Land caused the nascent nation of Israel to redeem its ancient promise at the same time we remember its tragic and torturous birth. 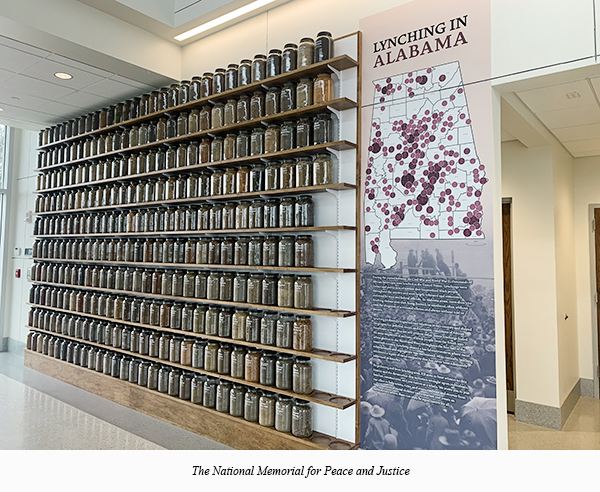 Also on my mind (raised by the writings of Ta-Nehisi Coates as well as by my visit to Montgomery), is the issue of reparations to the African-American people for the atrocity of slavery and its toxic cultural legacy. I know just how complicated and controversial this idea is. But we need to think and talk about reparations and redemption, and how such an effort might take shape were it even possible for this country to repair and redeem itself.

Moses taking Joseph’s bones and the Israelites taking the Egyptians’ valuables in payment for their years of slavery are equally significant actions. They assure us that even after centuries have passed, redemption is possible. Though it is supremely difficult, I suggest that in this Black History Month especially, we think deeply about the potential for restorative justice—not just for historic and contemporary African American experience in this country but also for all persecuted peoples here in the USA and around the world.