This week’s Torah portion contains one of the more challenging tales of our ancestors and how we might NOT want to learn from them how to behave. Sarai, long expecting a son, begins to lose patience and prevails upon Avram to be intimate with her handmaiden Hagar so that she might bear him a son.

Now before I go on to criticize Sarai’s behavior, it is only fair to point out what she had been going through. Here is a woman, married to a man who hears an unknown voice call out to him telling him to leave their native land, their families and everything they knew until then. This voice doesn’t tell them which land to go to; rather this land will be shown to them, all in good time. This land turns out to be the Land of Canaan, that is, the land filled with Canaanites. It is not empty, not just waiting for them and their offspring to inhabit it.

Soon after they arrive there is a famine in the land, and they find themselves in Egypt with Avram urging his wife Sarai to say that she is his sister so that he won’t be killed. It seems that she also had to be intimate with the Pharaoh in order to protect her husband and of course, that had to be awkward!

Then she watched as her husband went ahead and allow his nephew Lot take the choicest pasture lands for himself. Again, when this same nephew falls captive to enemy armies and Avram leads his men into battle in order to save him, Sarai was watching with a critical eye.

And all this time, she must have heard Avram tell of how the Lord continued to appear to him and promise that he and his wife will give birth to a great nation.

“Nu”, Sarai may well have said to herself (or perhaps to God), “so where is this child already?!” 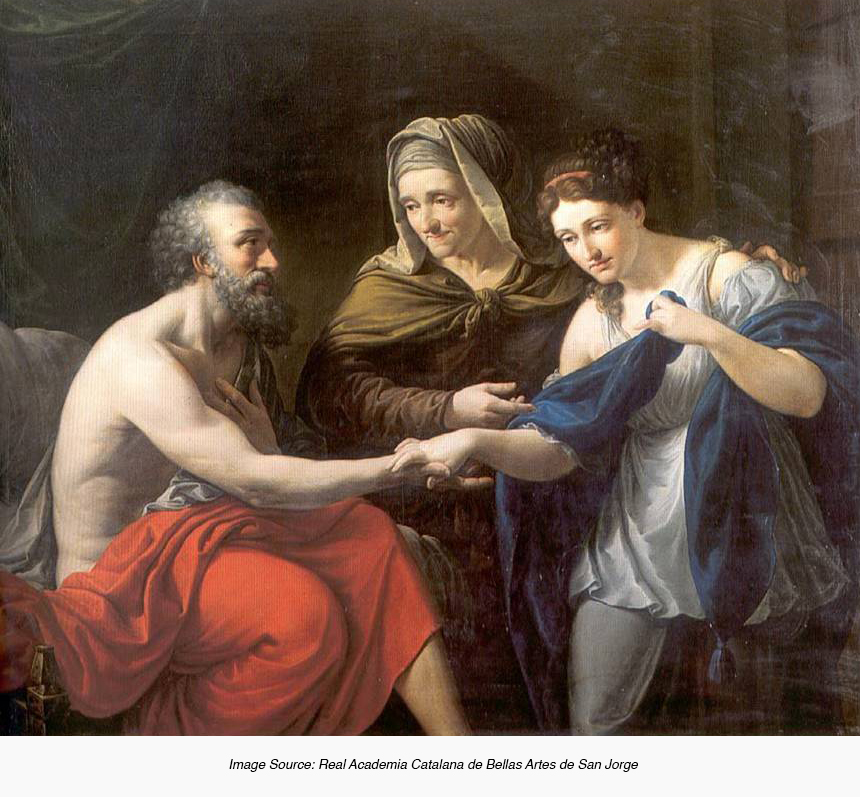 Sarai, Avram’s wife, had borne him no children. She had an Egyptian maidservant whose name was Hagar. And Sarai said to Avram, “Look, the Lord has kept me from bearing. Consort with my maid; perhaps I shall have a son through her.”

The Hebrew of the next phrase is important:

The key word in this last sentence is shama, translated as “listened”, “heard” or “heeded.” In any case, Avram has used his ears to listen, and then obeys Sarai’s wishes.
No one, of course, asked Hagar what she thought about all of this!

The text goes on:

…(vs. 4) He cohabited with Hagar and she conceived”

Boom! One time in bed and the woman is pregnant! How must have Sarai felt about this?!

And when she [Hagar] saw that she had conceived, her mistress was lowered in her esteem.

Once again, the Hebrew is important for us to appreciate the art of the bilblical narrative: Hagar uses her eyes and sees – vateireh – that she is with child, and then shows with her eyes – vateikal g’virtah b’eineiha – her reduced respect for her mistress Sarai.

Avram must now hear with his ears how Sarai blames him for what has happened:

The wrong done to me is your fault! I myself put my maid in your bosom; now that she sees that she is pregnant, I am lowered in her esteem!

That last phrase in Hebrew is a repetition of what was said above about how Sarai was no longer respected in the eyes of Hagar.
At this point, Avram seems to give up and say:

Your maid is in your hands. Deal with her as you see fit.

Now it’s Sarai who hears with her ears as her husband says to her that she may do what is right in her eyes – asi la hatov b’einaiyich. She then proceeds to torment her maiden, who in turn runs away.

At this point God gets involved by sending an angel who finds Hagar at a spring in the wilderness. Interesting that the word for spring is ayin, the same word as eye, as if to suggest that this is where God has seen Hagar in her sorry state.

And finally, this angel of God blesses Hagar, telling her that she will give birth to a son and that she shall call this son Yishma’el, which means “God will hear.” Hagar then gives a name to that spring where this all took place, calling it Lahai-Roi, which perhaps means something like “God has seen to it that I live.”

Sarai SAW WITH her eyes that she was not bearing a child, she SAW THAT the eyes of her servant Hagar no longer showed her respect. She did with Hagar WHAT SHE SAW FIT in her own eyes. However, she was unable to SEE the truth about herself and her behavior.

Avram HEARD WITH his ears the pain of his wife Sarai, LISTENING and OBEYING her wishes, only to HEAR that he had done the wrong thing. However, he was unable to HEAR and SEE the misery of Hagar.

God HEARS Hagar’s cries and SHOWS her a better future through the EYE in the ground, the spring.

The ears and the eyes, together with the mouth, used in such different ways, sometimes wisely, sometimes not so wisely. Yet each of these body parts must be used. Communication is a complex thing, which so often goes wrong. Our ability to communicate with each other in the complex ways we do is one of the things that set us apart from the rest of the animal world. One might say that this is what is meant in the first chapter of the Genesis (1:27), when God created humanity in God’s own image.
Conversely, we read in Psalm 115:5-6 a description of human-made idols:

Rabbi David Kimchi (Provence, 12 th -13 th cent) comments on this verse that these idols are made to imitate human beings who are, of course, unable to breathe life into them.

May we learn to use our eyes, ears and mouths to be like God in our actions, to see the injustice done to others, to hear the cries of misery and suffering of those in need, and to speak out on their behalf.