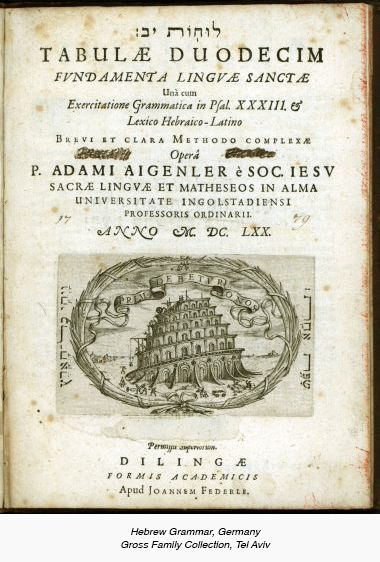 Tucked toward the end of this week’s Torah reading, Parshat Noah, is a wonderful example of narrative artistry, the story of the tower of Babel (Gen. 11:1-9):

Now the whole world had one language and one kind of speech. As people moved eastward, they found a plain in Shinar and settled there.

They said to each other, “Come, let us bake bricks and scorch slabs.” They turned out as solid as stone, and were bound with bitumen.

Then they said, “Come, let us build ourselves a city, with a tower that reaches to the heavens, so that we may make a name for ourselves; otherwise we will be scattered over the face of the whole earth.”

But the Lord came down to see the city and the tower the children of Adam were building.

The Lord said, “If as one people speaking the same language they have begun to do this, then all they plan to do will be possible! Come, let us go down and confuse their language so they will not understand each other.”

So the Lord scattered them from there over all the earth, and they stopped building the city.

For many, this mythological tale is the answer to the question: If Humanity stems from just one couple, Eve and Adam, then why do we speak so many different languages?

For ancient Jewish interpreters, from at least Josephus’ time onward, this endeavor was engineered by none other than Nimrod whose intention (as his name in Hebrew suggests) was solely a rebellion against God.

In modern times, many scholars began to see this anecdote as an ancient polemic against the Babylonian ziggurats, thought by those who built them to be the place where Heaven and Earth touch. But there’s another message lying deep in the foundations of this fabled tower. The narrator claims that all of humanity was working together and in unison to achieve this one goal. While God is surely unhappy with the mortals’ desire to invade the heavenly space, it seems that God is likewise concerned with the meta-goal of all humanity working together on one particular project.

This might seem counterintuitive since so often we are led to believe that unity is a good thing. And indeed, this is a message found in our literary tradition from the Prophetic literature of the Bible through contemporary Jewish thinkers. But unity does not necessitate, nor even imply, uniformity and there is a distinct quality assigned to each individual.

A good example of this idea is found in the Mishnah (Sanhedrin 4:5):

… for humans stamp many coins with one seal and they are all like one another; but the King of kings, the Holy Blessed One, has stamped every human with the seal of the first human, yet not one of them are like another.

Therefore everyone must say, “For my sake was the world created.”

This, of course, is nothing new to those of us who grew up in relatively multi-cultural environments and certainly in line with what we think of society in a global sense. But there is still much to do when it comes to race, gender, religion and politics at all levels. Our laws and policies, our language and culture are all too often tarnished by a previously held ideal that was actually created by those who had the power.